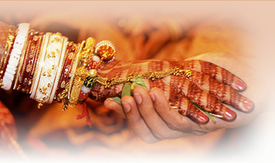 The wedding ceremony is known as Vivah Sanskar. This involves starting a new family and learning duties as a married couple. Hindu weddings are especially traditional because it considers wearing heavy sarees, bangles, nose rings, head tikka, necklaces and putting on traditional henna. Arranged marriages do take place quite a lot of times in Hindu weddings, but to assure the difference, it is not considered a forced marriage because the bride and groom both have to agree that they want to get married. It is generally recomended for both families to meet by a relative or friend. The Hindu wedding ceremony is really long and it may take hours to complete!
Jayamaala - In the beginning, the bride's parents and family welcomes the bridegroom's family at the house where the initial wedding rituals take place. A kum-kum, which is a sort of red powder, is applied to the bride and the groom. Both families introduce each other, and start the development of a relationship. The bride and groom then exchange garlands (jayamaala) and declare:

"Let all the learned persons present here know, we are accepting each other willingly, voluntarily and pleasantly. Our hearts are concordant and united like waters." 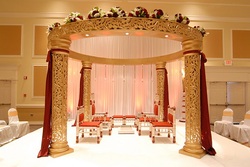 Madhu-Parka - The groom is brought to a unique decorative place known as mandap. This is where the groom takes his seat and is offered a liquid to drink - a mixture of milk, ghee, yogurt (dahi) , honey and sugar.

Gau Daan and Kanya Pratigrahan - "Gau" means cow, which is considered as "mother goddess" in India, and that is the reason why Hindu's don't eat beef. "Daan" means donation. Now in the modern time, the exchange of gifts is really common. When a woman is married, it is a symbol to wear a religious auspicious neclace known as Mangalsutra. This is given to the bride by the groom's mother. The bride's dad then declares that their family has accepted the marriage and now request the groom's family to accept too. 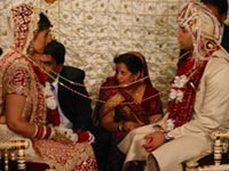 Vivah-homa - This is when the bride and the groom both sit cross-legged on a mattress in the wedding hall and a bonfire is lit. The priest recites chants in Sanskrit and gives instructions if required any during that prayer.
Paanigrahan - During this ceremony the vows are repeated in front of the priest while the husband hold's the wife's hand:

"I hold your hand in the spirit of Dharma, we are both husband and wife".

Shilarohan and Laaga Homa - During this ceremony, the bride climes over a rock/stone that symbolises her willingness and strength to overcome difficulties and face them when they occur during her lifetime. Both bride and the groom, tied up by the bride's saree, walk around the bonfire 4 times. (the bride leads 3 times and then the groom leads the 4th time) Now the couple join hands, and the couple promise that they will work together as one throughout lifetime. Now the the groom takes some red cum-cum powder and marks it over the bride's hair. This is a symbol for married women in India and is also known as sindoor.

Sapta-Padi - This is the main part of the ceremony. The couple walk 7 steps reciting a prayer at each step which are basically 7 vows they promise to make to one another for:
1. Food
2. Strength
3. Prosperity
4. Wisdom
5. Progeny
6. Health
7. Friendship

Surya Darshan and Druva Darshan - This means praying to "The sun and the Druva (Polar star)" to be blessed with creative life as well as to remain un-shaken like the Polar star.

Ashirvada (Blessings) - The couple now walk around and touch the feet of their elders as a sign of respect in India. The elders then are blessed for a long and prosperous married life.

Throne - After the main wedding ceremony, the bride and groom get a seat which looks like a one for "A king and queen" and now take photos with guests that have come to attend this marriage ceremony. In general, about 200 people come to a wedding ceremony which may be a lot compared to other religions! There is a dinner provided and it generally consists of many different main courses, starters as well as sweets.

Indian marriage cermonies include everyone dancing and enjoying their time, as well as loud music and other celebrations.
Powered by