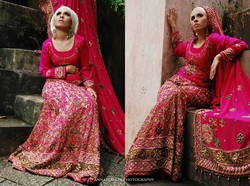 Islam marriages are known as Nikah and sacred traditional marriages. Many people confuse muslim marriages as many muslim weddings differ according to culture and where they live. Many muslim weddings, for example: European, Turkish, African, and Malaysian muslim weddings can be totally different to a wedding in Pakistan or Bangladesh. For many muslims, wedding actually doesn't just mean registiring in the office, but the real wedding ceremony that takes place.
In Islam, many muslim married couple are really happy during their lifetime even though the didn't meet each other before. However, it is recommmended that a wali or gardian make sures the marriage will be successful. Muslims pray to only one God, and in Arabic, he is known as Allah.

Many marriages are arranged in Islam because parents want their best for their children and like their son/daughter to be with a good-life partner. The main aim of a marriage is to adjust with a life partner and eventhough divorce is allowed, it is what God likes the least. Most muslims live protected lives, and are restricted from the buisness of "falling in love" which can certainly lead to tragic consequences, heart-breaks, as well as depression that may result due to not being able to live with the person they actually love instead of a random person they do not even know. If a couple disagree with a marriage, they have full rights to reject without any embarassement.

After the marriage arrangement is made, it is an essential part of the wedding contract for the groom makes a financial agreement upon the amount of money he will give the bride as a gift .  This payment is known as mahr, and is only for the bride to use for whatever she wants. A lot of times, the family of the bride may ask for enormous amounts of mahr. It says in the Quran that women should ask for modest sums, however, there are many women who generously help their husbands with financial money instead of using it for themselves. If the women works and earns money for the house, it is kept as donation money sponsored by the wife. (charity) 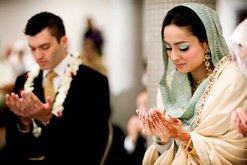 The Muslim wedding ceremony is known as nikah. It is a simple ceremony that begins with a short sermon from the Imam who performs and instructs the whole ceremony. It mainly consists of praying to Allah, as well as the vows that the bride and groom promise to one another. All Muslim marriages have to be declared publicly and may not be kept a secret. In general, this is told by having a large feast known as walimah and all are invited. This is the time for the groom to declare that the couple are getting married and are now for one another.
Many Muslim weddings, as mentioned above can be different depending upon the culture or where they come from.  In many weddings, the bride and the groom are asked to sit on a throne on a platform, so they can be seen by guests. In addition, they receive money, and gifts by those relatives and family members present at the wedding. Many brides prefer a white wedding dress, however, the Muslims that live in the Asian areas generally wear a shalwar-quameez outfit in scarlet with gold thread. In addition, they have their hands and feet covered in a henna designs. During the ceremony, there may be hundreds of guests attending the wedding and be provided vast feasts where men and women sit in a different room. Many Muslims may also just have a short ceremony by inviting just a few family members, relatives and friends.
Muslim weddings may also consist of dancing, firing guns, lots of noise and hilarity. Asian Muslim weddings may last up to several days as they have before wedding gathering too.

Many times after the main ceremony, some other rituals make take place such as Fatihah which is when the first chapter of the Quran is read as well as durud which means blessings from elders. This is one of the main vows said during the ceremony:

Bride: "I, (bride's name) offer you myself in marriage in accordance with the instructions of the Holy Quran and the Holy Prophet, peace and blessing be upon him. I pledge, in honesty and with sincerity, to be for you an obedient and faithful wife."

Groom: "I pledge, in honesty and sincerity, to be for you a faithful and helpful husband."