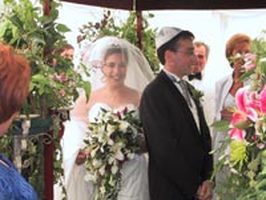 Jewish marriages, as all marriages is a great turn in life and always brings up the thought of celebration and joy. In the past, it was common that Jewish couples had arranged marriages decided by their parents and a match-maker, known as Yenta. All the preparations and rituals of the wedding instantly begin after the engagement of the couple. The ceremony that takes place after the engagement is known as tena'im. During this ceremony, the couple are asked to break a plate symbolising the extreme loss in Jerusalem when their temples were destroyed. Despite the happy momentum of the marriage, Jews still remember the tragic loss. Jewish weddings can take place on any day except for when the main festivals are ongoing such as Jewish Sabbath which begins from friday sunset until saturday sunset. The wedding may also not take place on Jewish New Year, The day of Atonement etc.

A week before the wedding is a time for excitement for the family and the couple itself. During this time, a special ceremony known as Ufruf is arranged for the groom. This is the time for the groom to visit the synagogue and participate  in the service taken place there. In addition,  this is when the groom announces his wedding to the congregation. Often this service is followed by some refreshments offered in the synagogue called kiddush. This includes the serving of food, drinks and wine. After the service, there is generally a private celebration lunch provided for special quests.

Meanwhile, the bride is generally busy going to the ritual bath known as Mikveh. She is required to take off all jewelery including nail polish and clean herself before the wedding so she enters marriage in complete purity. After completely being in the water, the woman recites a special prayer in which she supervised and assisted to ensure it is done properly.

In Jewish weddings, many things have been changing from olden weddings as the lifestyle of the couple are changing. For example:

at the wedding ceremony

A Jewish wedding ceremony is generally taken place under the supervision of the rabbi who knows the laws and customs of the wedding.
1. Ketubah - The marriage ceremony begins with signing the ketubah, which is the Jewish marriage contract ensuring the marriage is taking place along with the legal terms and conditions of Jewish marriages. Signing the contract takes place prior to the main ceremony where 4 witness along with the officiator of the service is present. Also during this ceremony, man men decide to sign an agreement considering that they will not ask for a Get (Jewish divorce) if the couple decides to separate. This is significant in the Jewish tradition for women because this means that despite the separation of the couple, they will be unable to remarry due to this agreement.
2. Bedeckan - The signing of the agreement is followed by another ritual known as Bedeckan (veiling). During this ceremony, the groom places the veil over the bride's face. This symbolises the groom protecting his wife forever until they live.
3. Chuppah - In other words, this is known as canopy. This is a fine decorated piece of cloth that is placed over the bride and the groom as a symbol of the starting of a new home. This takes place outside under the stars as that is considered as a blessing given by God to the patriarch Abraham, saying that his children shall be " as the stars of the heavens." The groom starts praying for his friends to find their perfect partner while when the bride arrives with her family, a song is played and the bride is joyfully welcomed. After arriving at the chuppah, the bride circles the groom 7 times along with her mother and her mother in-law as the groom continues to pray. This symbolises a woman being protective, with love and understanding and a symbol of remaining safe throughout life. The number 7 symbolises the 7 days of creation and the fact that the bride and groom are about start a whole "new world" together as one.
4. Kiddushin - The groom now places the wedding ring on the finger of the bride, and recites the following:

"Behold you are sanctified
(betrothed) to me with this ring, according to the Law of Moses and Israel."

5. Sheva brachos - This in other words, means 7 blessings. The blessings begin with praising God for creating human beings as "two part creature," man and woman. This blessing expresses hope that the couple will remain together forever, like Adam and Eve in the Garden of Eden.  Also, there is a prayer considering the rebuilt and safety of Jewish people and Jerusalem. At this point, the couple drink 7 cups of wine and the groom breaks a glass. (representing the destruction of Jerusalem) Many times this verse is recited after:

"If I forget thee O' Jerusalem, let my right hand forget its cunning: If I do not raise thee over my own joy, let my tongue cleave to the roof of my mouth"

Cheder Yichud - Now the couple are married and are taken to the Cheder Yichud (room of privacy) and are accompanied by dancing guests. After the married couple walk into the room, and the door is closed, they enjoy a big feast (having fasted all day!) together. Before the meal begins, it is a requirement to wash hands and begin the feast with bread. After the meal, all the guests join in and the dancing begins. The bride and groom stand in the center, just like a king and queen, and all the guests surround them in large circles.
After the dancing, it is traditional to recite the seven blessings over wine, shared by the bride and the groom.
Powered by